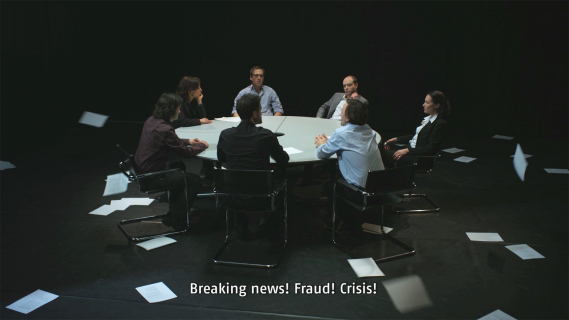 Layers is the first of a few works in which fictional economy and its continuous collapse was analyzed as a continuation of practices of an enormous imbalance of power between the makers and those on whom the effects weigh disproportionately harder and longer. A supposed conversation takes place in between some actors on stage. Statements on speculation by authors from the Middle Ages to Present join to a formless dialog. The original text fragments outline different attitudes and disciplines. The film Layers consists of several layers of speech and commentary and a form of argumentation to which a technique called layering is a conceptual reference. Known as a manipulation technique in high-frequency trading, layering is an expression for a brokerage firm that makes and then cancels orders they never intended to carry out.